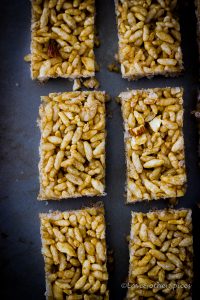 Kids,they always seem to be hungry."Mama,can I have something to eat?" or "Mama,can I have a snack?" are often repeated words in our house. I've tried all sorts of things to keep their hunger at bay till the next meal time. Some stick.Some don't.

I give them cucumber with hummus. Because it's something I like to eat. Hummus remains untouched sometimes. But a bag of corn tortilla chips would vanish within seconds with hummus.I've forced them traditional stuff. Like a sweet semolina conjee that I used to enjoy. It doesn't get past a few teaspoons. But a vanilla cake or a plain muffin gets chomped quickly leaving no leftovers.

A cupcake with fruits or veggies in it,only a few bites here and there like the rats nibble. Perhaps, an oats bar with nuts and seeds in it.No way.
I accept defeat. 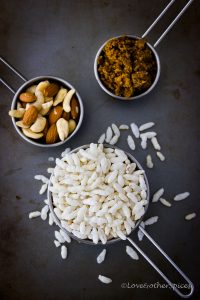 But I never give up. In my hunt for munchies,I spotted these Puffed Rice in the Indian store. They are a common ingredient in the savory and sweet dishes in some parts of India. And a popular snack called Bhel which is sold in beaches and roadside snack shops.

We all love a good crunch. These puffed rice are what it is. I made it into bars so it'll be an easy pick-me-up. They are super quick to make. These bars were done in 10 minutes flat. They are Gluten free,processed sugar free and packs some nuts too.

Kids tried it and they liked it.It was a huge relief. And I hope this snack will stick for some time.

Oil a baking sheet or a tray.
Lightly roast the puffed rice in medium heat.Take care not to brown or burn. It doesn't  have to change color.This would take 3 to 4 minutes.
Heat the jaggery with water and when the jaggery is melted strain it and pour it back to the pot.
Heat the melted jaggery until it reaches a soft ball stage. Keep a bowl of water next to you and pour a drop of jaggery syrup to the water. If it stays in place and doesn't disappear in the water that's the right consistency. You have to be near the stove and stirring as it reaches this stage quite quickly.
Add the ghee to the jaggery syrup.
Add the nuts and the puffed rice.Give it a good whirl till the puffed rice is nicely and evenly coated with the syrup. Bring it to a one big mass.
Spread the mixture onto the oiled baking sheet. And flatten it evenly. I flattened it to a 7" * 8" rectangle.
Let it cool down for 5 minutes and cut into desired shapes.

The puffed rice and jaggery can be found in local Asian shops,specialty stores or Indian stores.
You could substitute dark brown sugar for jaggery but I haven't tried it.